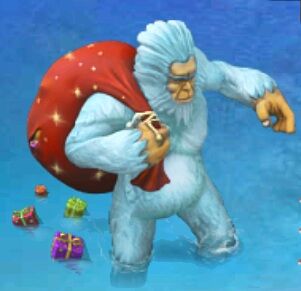 The event started on December 26, 2013 and lasts for 14 days. It is similar to the Wet Willy event. It entices people to cooperate online to beat a yeti-like beast, an Ice Giant.

In-game description: Your help is urgently needed! The Ice Giant has stolen all the Christmas presents. Let's teach the scoundrel a lesson and bring the holiday back to people!

Take part in at least one battle and you will get a special award containing these items:

Every 5 minutes a special tourist (later referred to as the peddler) will appear. In exchange for 5 zaps from your energy bar he will provide you with a weapon to use against that Ice Giant. He also drops some icicles

(usually 3 of them), needed to attack the giant. As the game states, the icicles are required in order to lure the beast near enough your position to attack it as the monster loves eating icicles. The giant has a total of 5000 damage points and the time you have to defeat it is 6 hours.

You can use 6 different weapons to attack Ice Giant:

You can do this in several ways.

Remember that if you start a battle yourself and you do not want to have the possible crew limited to friends only, you need to untick the "Accept friends only" button (a small icon in the lower right corner on the screen). When you have already joined a battle you did not start yourself, you can only invite your friends.

In case the crew wins, everybody gets so-called Christmas Presents, some experience and, in case of the first 3 places (that are marked with star-shaped medals) a certain amount of additional awards:

If the party loses, everybody will get some experience depending on how many damage points you got.

These are the different presents you can receive after fighting the Ice Giant. If you have received a present that is not listed here, please let us know the contents in the comments. Also do so in case you see a different amount of something in the contents.

Damage per weapon type per battle

Let's try to calculate how much damage can each weapon type do in the 6 hours deadline. It's rather easy, we just need to divide the deadline (6 hours) by the cool-down of a certain weapon and multiply it by its damage. To make sure we get an easy to compare score, we're going to use minutes as our unit. So forget about 6 hours - we use 360 minutes (6 hours is 6 x 60 minutes).

Now let's see how can we minimize the costs of winning a battle ALONE (if there's a whole crew involved, the costs for a single player are diminished). We can see that in 6 hours, Petards can be used 6 times. However, this isn't so clear - we need to also take into consideration the fact we have to accept EVERY use of each weapon. In other words, we cannot make it reload itself until we run out of this weapon type. This takes time. No matter how fast you click, you're bound to lose at least a few seconds and the weapon won't reload to its extent for the last time. Therefore let's say we can use 5 Petards. Now it makes sense! As the costs of weapons differ from level to level, you have to multiply this score by the cost you have. I'm making those calculations on level 34, so for me, the cost of Petards is $22,500. The total of damage I can cause with Petards is 5 * 20 = 100, so the total cost of this is $22,500 * 5 = $112,500. The same calculations (with only the data differing) apply to all levels.

Using this method, we can see that using only dollar-costing weapons, one can deal a total damage of 1112. If every of those five people in the crew dealt that damage, the battle would be won pretty soon and nearly without spending any piastres!

Here you can see all stuff that can be contained in piles of Christmas Presents. It is listed in no strict order and it is not grouped into chests. For listing all the contents as they are grouped, see "Christmas Presents' Contents" section.

Community content is available under CC-BY-SA unless otherwise noted.