As of v2.2.6 of the iOS (not iPad) version of the game, the Expedition Center was added to the game.

The Expedition appears on the beach from the very start of the game, but is not available for use until 1800

has been collected (about half way through level 5). At that stage, an investment of 150

is required to enable it. When ready, the player is then awarded with 100

, one medium profit scroll, one medium time scroll, one tourist certificate and one small tourmaline recipe.
The Expedition Center is positioned to the right of the Idol. Any buildings (such as Beach Discos or Alexandrian Lighthouses) that occupied the space before, are moved to special extra slots in the warehouse. It is assumed that all beach decorations in the area are lost.

Version 2.2.8 of the iOS game has brought two disappointing changes. It's unclear whether this is as a result of a bug or a deliberate change to the game.

Secondly, the chances of any expedition returning anything but a few

seem to have been seriously increased. Previously, a trip might return a number of extras, but now getting more than one extra item is unusual.

The purpose of the Expedition Center is to send a team of explorers off on treasure seeking journeys. You can send them on up to 60 journeys in any 24 hour period.

To select a journey, first select a location.

There are five locations, though access to higher level locations seems to be XP-dependent (at least for the iOS version of the game). Different locations need different sized teams and equipment before they'll set off:

Having equipped your team, you then need to plot a route. This can be achieved via one of two methods: solving a simple maze, or by paying 1 € to bypass the maze. 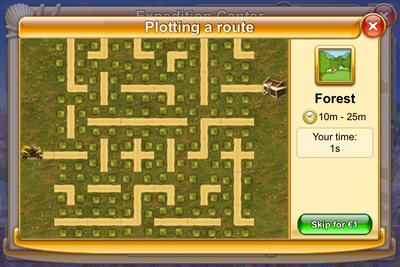 Up to three such journeys can be launched at any one time.

An important note is that, having hired a team member, they stick around for multiple journeys. It's too early to say whether it's forever, or for a certain number of journeys. Either way, they appear to be hired for many journeys, which makes the treasure seeker a more practical proposition.

Currently, there is only one type of equipment required for journeys: the shovel (

). Three of these are needed for a journey into the Valley. They can either be found as treasure on other journeys, or purchased for 1

The purpose of any journey is to find treasure (generally referred to as loot. The various types of loot available is gathered into sets and the chances of finding anything from a set is shown when planning a journey: 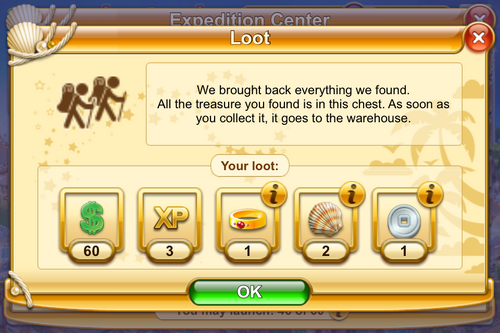 ) and shards of a new gem called Tourmaline (

Note - this feature requires the mandatory expenditure of

Whilst a journey is underway, you are offered the option of repeating it. This enables you to re-run the expedition without having to re-select the team and equipment and solve the maze. To do so though, you must buy and use a certificate.

Four certificates exist. Each has a different cost and benefit:

There is one incentive beyond saving time/effort in using these certificates to repeat journeys. The secret Numismatics award requires the purchase of 25 certificates. Any type can be purchased and e. g. the legend certificate only counts as one purchase, not 35. It is the most economical to buy tourist certificates (a total of 24 piastres needs to be paid, as one is supplied free when the expedition center is enabled). This does not take into account each certificates' benefits.

Retrieved from "https://paradiseislandhd.fandom.com/wiki/Expedition_Center?oldid=62782"
Community content is available under CC-BY-SA unless otherwise noted.